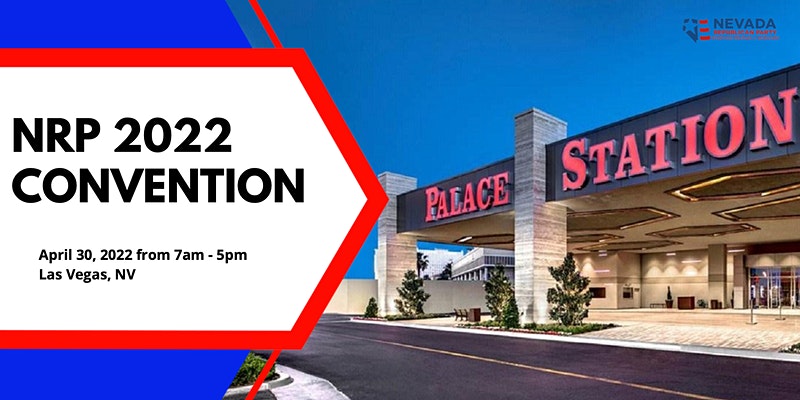 Congratulations on your election as a delegate to the 2022 Nevada State Republican Convention, which will be held at the Palace Station Hotel & Casino in Las Vegas, Nevada on April 29 & 30.

Thank you for being a shining example in the Republican Party! Being selected as a delegate by the Republicans in your home county is an important honor. The work you will do to help guide the party over the next two years will be critical for the State of Nevada and all of America.

Republicans across the United States have a monumental battle ahead. The grassroots of the Republican Party will be the deciding factor as we work towards earning Republican majorities. Here in Nevada, it is up to each of us to organize for all our candidates locally and to make sure we send Republicans to Carson City. We also have a remarkable opportunity to enlarge our footprint in Washington. Together we can accomplish these goals and make Nevada and America Red again!

Nevada is one of the most important Battleground states in the nation. Our growing population is very diverse. We’re finally starting to see a return to the strong economy that existed before Democrats destroyed it for political gain. After Republicans win in 2022, we can implement policies to complete Nevada’s recovery and begin to produce true economic growth and job creation again after a painful two year shut down of our economy amid nearly four years of failed policies that we’ve suffered under complete Democrat control of Nevada government.

It’s up to each of us to help build a party that reaches out to every Nevadan - a party that makes the case that America is an idea worth fighting for. We’re at our best when we live by our ideals of limited government, less regulation, lower taxes, job creation, and more take-home pay for the American worker. 840 S Rancho Dr #4-800 | Las Vegas, NV 89106 | 702.586.2000 | www.nevadagop.org

We know Democrats have a very different vision for the future of our state and our country – we’re experiencing their destructive vision in higher gas prices, CRT and the woke indoctrination of our children, an invasion of illegal aliens across our southern border, and a “lead from behind” foreign and military policy that has the world teetering on the brink of nuclear war. This is why we must continue to build the Nevada Republican Party into an organization that benefits all citizens as we work to achieve a Red Wave this election and continue to gain strength for continued success in 2024.

I look forward to working with each of you in 2022 and beyond. Your dedication to the conservative movement and the Republican party make me proud to serve as your chairman. Together we will have a successful convention and a successful election this November!