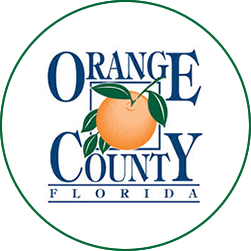 Orange County was one of the first areas of Florida to turn Republican. It swung from a 15-point victory for Franklin D. Roosevelt in 1944 to a seven-point victory for Thomas E. Dewey in 1948. It eventually became one of the stronger Republican bastions in Florida, as evidenced when it gave Barry Goldwater 56 percent of its vote in 1964. For most of the second half of the 20th century, it was one of the more conservative urban counties in Florida and the nation. From 1948 to 1988, Democrats only cracked the 40 percent barrier twice, in 1964 and 1976. However, the Republican edge narrowed considerably in the 1990s. George H. W. Bush fell from 67 percent of the vote in 1988 to only 45.9 percent in 1992. In 1996, Bob Dole only won the county by 520 votes.

In September 2000,[41] Democrats overtook Republicans in voter registration. This was a factor in Al Gore becoming the first Democratic presidential candidate to carry the county since 1944. John Kerry narrowly carried the county in 2004. In 2008, however, Orange County swung hard to Barack Obama, who won it by the largest margin for a Democrat since Roosevelt. In the years since, it has become one of the strongest Democratic bastions in Florida.

Since 2000, Republicans have yet to retake the advantage they once enjoyed. In the twelve years that followed, Democrats experienced a modest increase in their voter registration percentage from 41.40% to 42.73% of the electorate. Minor party voters also had modest growth, increasing from 2.17% to 2.37%. In contrast, Republicans experienced a sharp decrease in registered voters, sliding from 40.95% in 2000 down to 29.85% in 2012. The beneficiary of the Republican losses have been unaffiliated voters. The percentage of the electorate identifying as an unaffiliated voter increased from 15.47% to 25.06% during this same period. Orange County is one of two different counties in the entire nation to have voted for Al Gore in 2000 after voting for Dole in 1996, a distinction it shares with Charles County, Maryland.