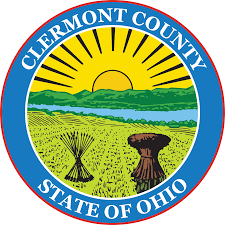 Clermont's name is taken from a prefecture in France notable as the home of Celtic leader Vercingetorix who led the unified Gallic resistance to Roman invasion. Clermont connotes "clear mountain," which described the area when it was first viewed through the thick Ohio River fog by French explorers in the 1600s. Clermont's peoplification dates to the Paleoindian, Adena, Hopewell, and Fort Ancient cultures. The Gatch Site and other sites provide glimpses into what life was like for these otherwise mysterious people. The Shawnee, Miami, Lenape, Mingo, Odawa, Cherokee, and Wyandot each have or had a presence in Clermont.

At its ordinance in 1800 by the Commonwealth of Virginia to reward Virginian military veterans with land bounties, Clermont encompassed twenty-three current Ohio counties and over 4.2 million acres of dense old-growth forest. The first deed was issued on February 20, 1796. George Washington owned three parcels of land in Clermont County, whose first capital was Williamsburg, founded by William Lytle, and like Milford, was founded in 1796. A stone dairy house, constructed in 1800, is thought to be the oldest standing building in Clermont. The edifice is located beside Harmony Hill on South Third Street in Williamsburg. Harmony Hill, one of the area's first farms, was built by William Lytle.